Democrats are further out of touch with reality than ever… 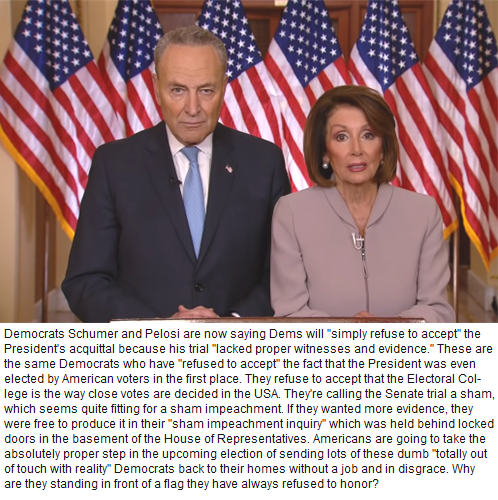 The report came as Sen. Lisa Murkowski said Friday she will oppose extending the Senate’s impeachment trial in order to hear more witnesses, a move that essentially dooms the year-long effort by Democrats to remove Trump from office. According to the Washington Times, with Murkowski’s announcement, Senate Republicans “believe they have at least 51 votes to close the trial down and move to a final vote acquitting the president.”

And Schumer, quoted by Fox News, insisted, “The president’s acquittal will be meaningless, because it will be the result of a sham trial. If there are no witnesses, no documents in this trial, there will be a permanent asterisk next to the acquittal of President Trump written in permanent ink.”  [NORM ‘n’ AL Note:  Democrats ought to know what a political sham looks like. That’s what they specialize in, sham politics.]

Democrats have reason to panic, as CNBC is reporting that socialist Sen. Bernie Sanders has “jumped into a virtual tie with Joe Biden nationally,” citing an NBC News/Wall Street Journal poll released Friday.

Sanders has the support of 27 percent of Democrat primary voters, according to the story, which is up 6 points since December. Biden, meanwhile, trails slightly at 26 percent, which is two 2 percentage points since last month.

This is shaping up like the perfect storm of politics, with the president’s State of the Union address coming up on Tuesday in the House chamber with Pelosi having to sit directly behind Trump as he could easily talk to the nation about the impeachment “sham,” as he has called it. Democrats have been talking about impeachment virtually since the day after Trump was elected in 2016, and it was one of the talking points in the 2018 elections that saw several new Democrats come to the House, shifting the majority and putting Pelosi back in the Speaker’s chair.

With a strong economy, low unemployment and increasing anger in middle America about impeachment, extremist gun control efforts, and the widening gap between anybody with common sense and the radical left, Pelosi’s Democrats have much to think about with the national elections just 10 months away.

[From an article published by CONSERVATIVE FIRING LINE]

[NORM ‘n’ AL Note: The real problem is even greater than Democrats realize, inasmuch as they have completely given up thinking altogether.  If they were able to think rationally, they would have gotten over Mr. Trump’s election long ago, and they certainly would not have put America through an impeachment which was able to come up with two of the weakest Articles of Impeachment imaginable.  Seems like a class of first graders could have done better than Pelosi and Schiff’s “obstruction of Congress” nonsense.  Pelosi and Schiff and the rest of the “Demolition Derby” crew assembled in the House DESERVE to be obstructed…and kudos to the Trump legal team who knew exactly how to do it.]